Two new independent Senators from Alberta, two from Ontario and one from PEI joined the Red Chamber.

So far, 45 independent Senators have been appointed under a new arm’s length process that relies on recommendations from an independent advisory board. Canadians can apply to be a Senator or nominate a candidate for consideration, and four vacancies now remain.

The new Senators are:

“Canadians want to see a Senate that reflects and represents them,” said Sen. Peter Harder, the Government Representative in the Senate. “Canadians can be confident that the Senate is moving towards that goal.” 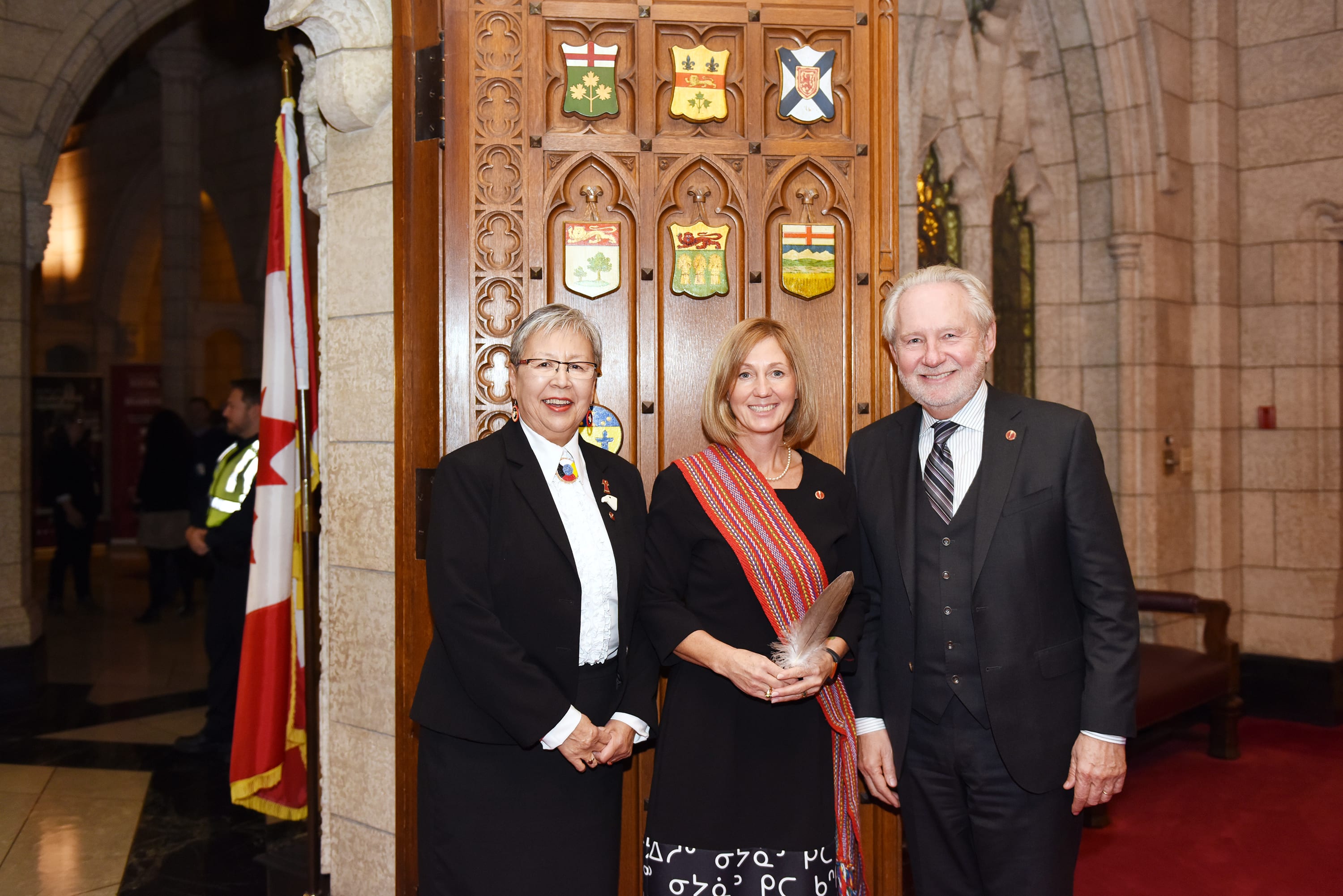 Senator Patti LaBoucane-Benson (centre) is welcomed to the Red Chamber for the first time by Senator Lillian Dyck (left) and Senator Peter Harder (right) on October 16, 2018.

Senator LaBoucane-Benson is a proud Métis who has devoted her career to strengthening Indigenous families, in particular through her work at the Native Counselling Services of Alberta. She has also helped the most vulnerable groups in Alberta, working with youth-based organizations and promoting community-based healing programs. She has received many awards and distinctions, including the Alberta Aboriginal Role Model Award for Education. 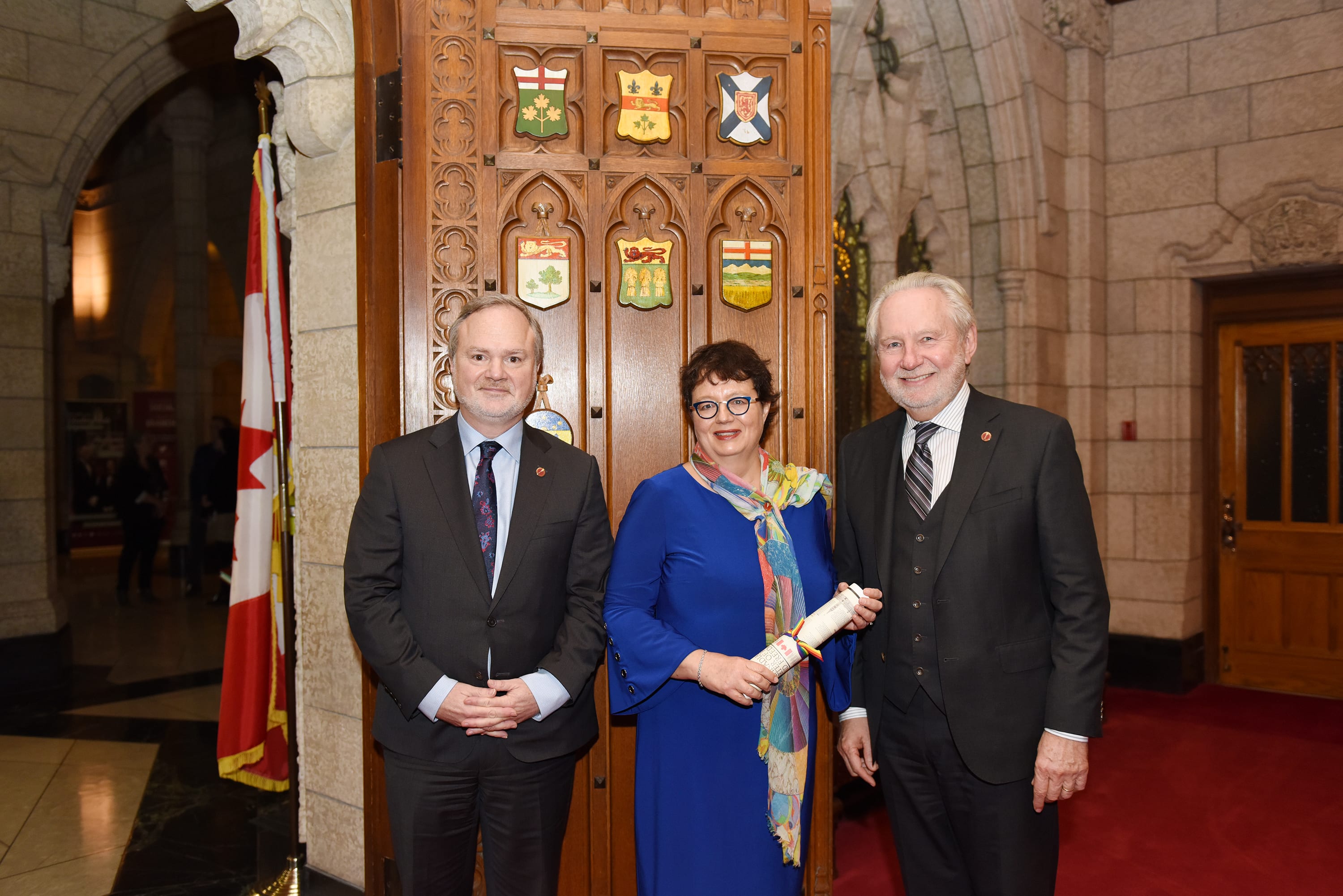 Senator Paula Simons (centre) is welcomed to the Red Chamber for the first time by Senator André Pratte (left) and Senator Peter Harder (right) on October 16, 2018.

Senator Simons joins the Red Chamber following a long career as a journalist in Edmonton, writing on a range of topics from mental health to Supreme Court rulings to public transit to the arts. She is a storyteller in print, radio and film, and notably is the co-author of a best-selling history book, Alberta: 100 Years a Home. She has received many awards over her long career, including from the Alberta Civil Liberties Research Centre for writing on LGBTQ rights. 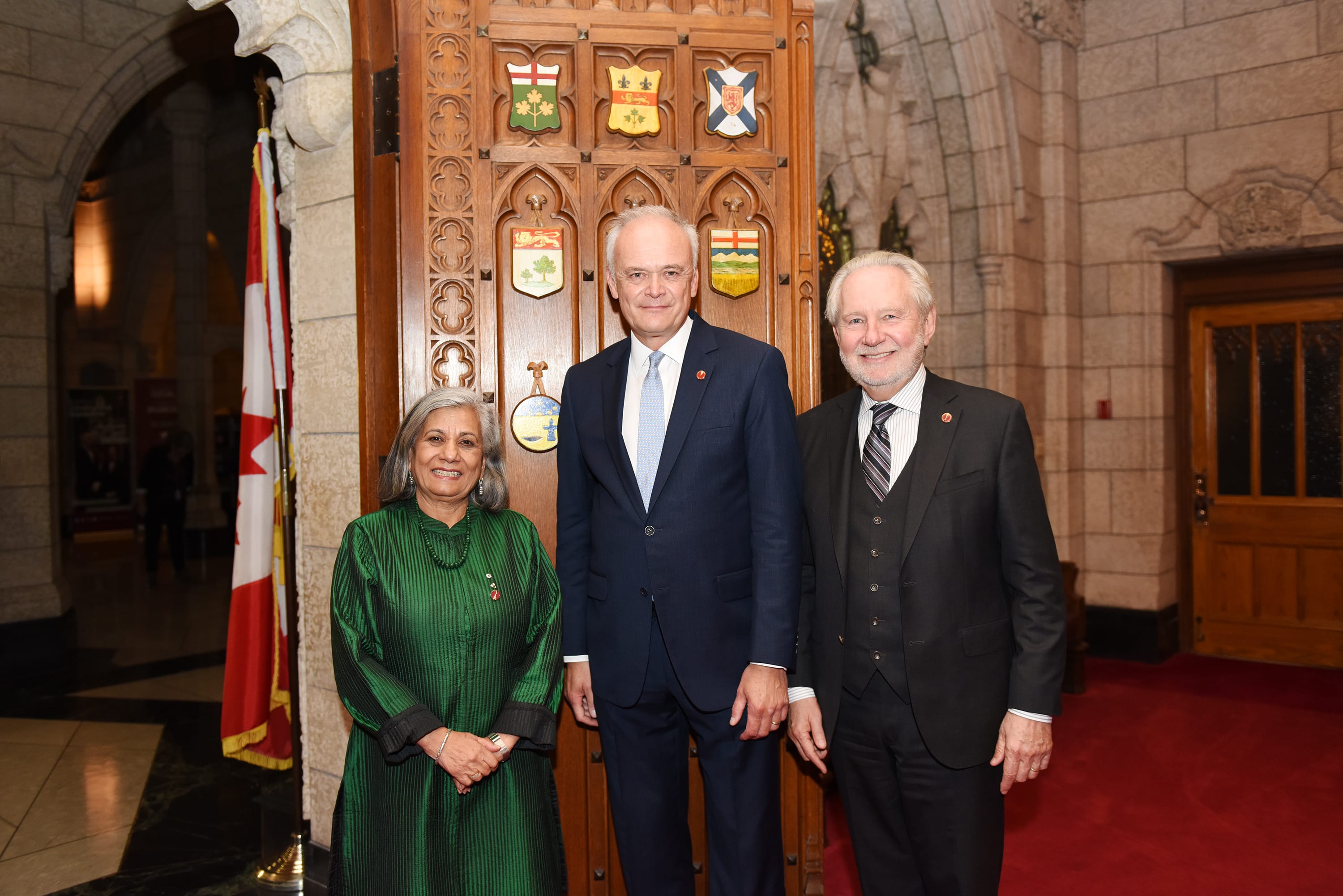 Senator Peter Boehm (right) is welcomed to the Red Chamber for the first time by Senator Ratna Omidvar (left) and Senator Peter Harder (right) on October 16, 2018.

Senator Boehm is a career public servant and foreign service officer, having served as Ambassador to Germany from 2008 to 2012, and having also represented Canada in postings in Washington, Cuba and Costa Rica. More recently, he served as Deputy Minister for the G7 Summit and Personal Representative of the Prime Minister (Sherpa), a role he held from July 2017 until his retirement in September 2018. He previously served as Deputy Minister of International Development, among other roles. Senator Boehm has received the Public Service of Canada Outstanding Achievement Award and the Canadian Foreign Service Officer Award for his contribution to advancing peace in Central America. 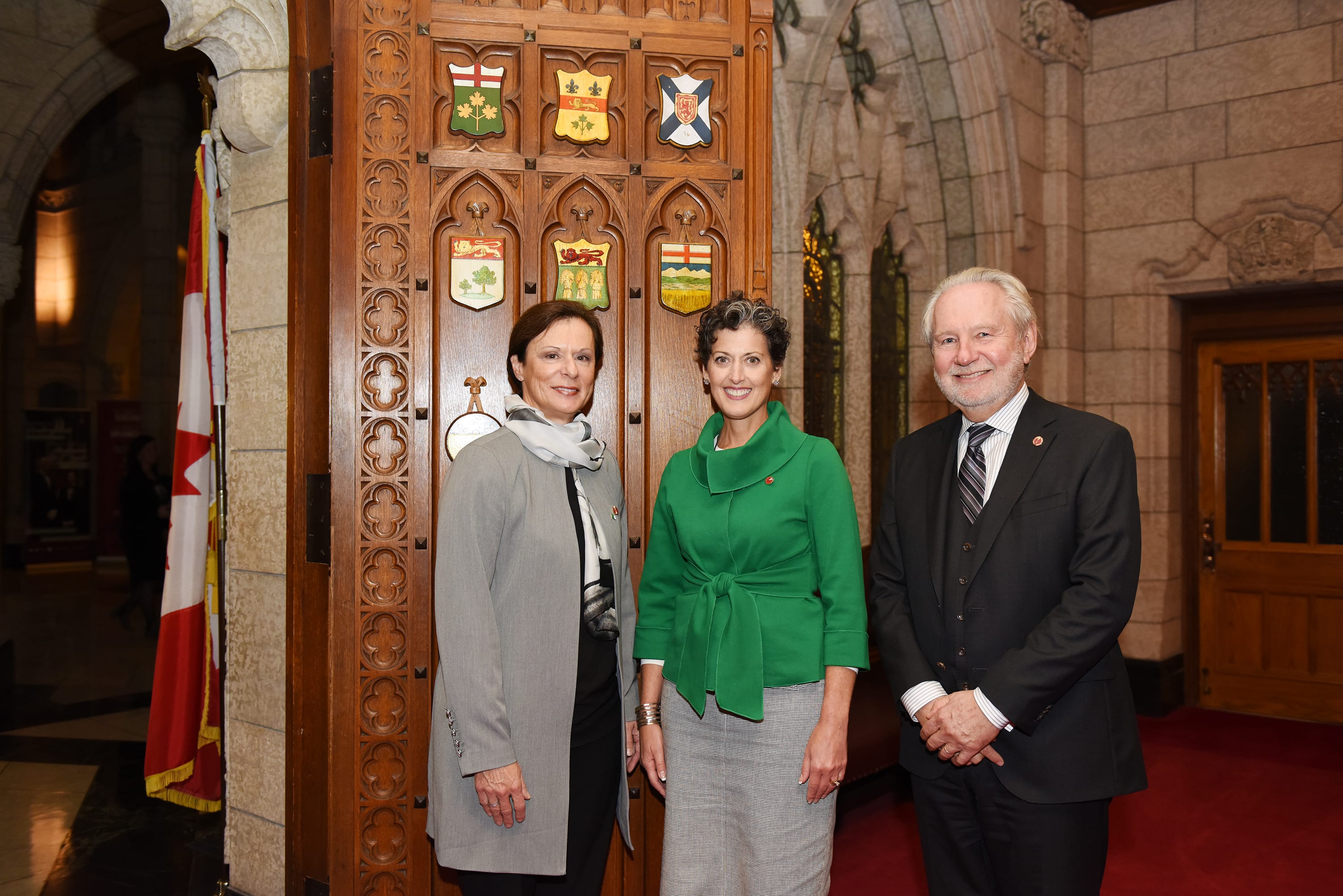 Senator Josée Forest-Niesing (cetnre) is welcomed to the Red Chamber for the first time by Senator Lucie Moncion (left) and Senator Peter Harder (right) on October 16, 2018.

Senator Forest-Niesing is a proud Franco-Ontarian from Sudbury who recently discovered her Métis heritage. She is a lawyer and community leader who has passionately defended and promoted access to justice in English and French. Indeed, Senator Forest-Niesing was the founding member chair of the Centre canadien de français juridique, as well as Chair of the Ontario Bar Association’s Official Languages Committee. She is also a patron of the arts, serving on the boards of the Art Gallery of Sudbury and the Ontario Arts Council. 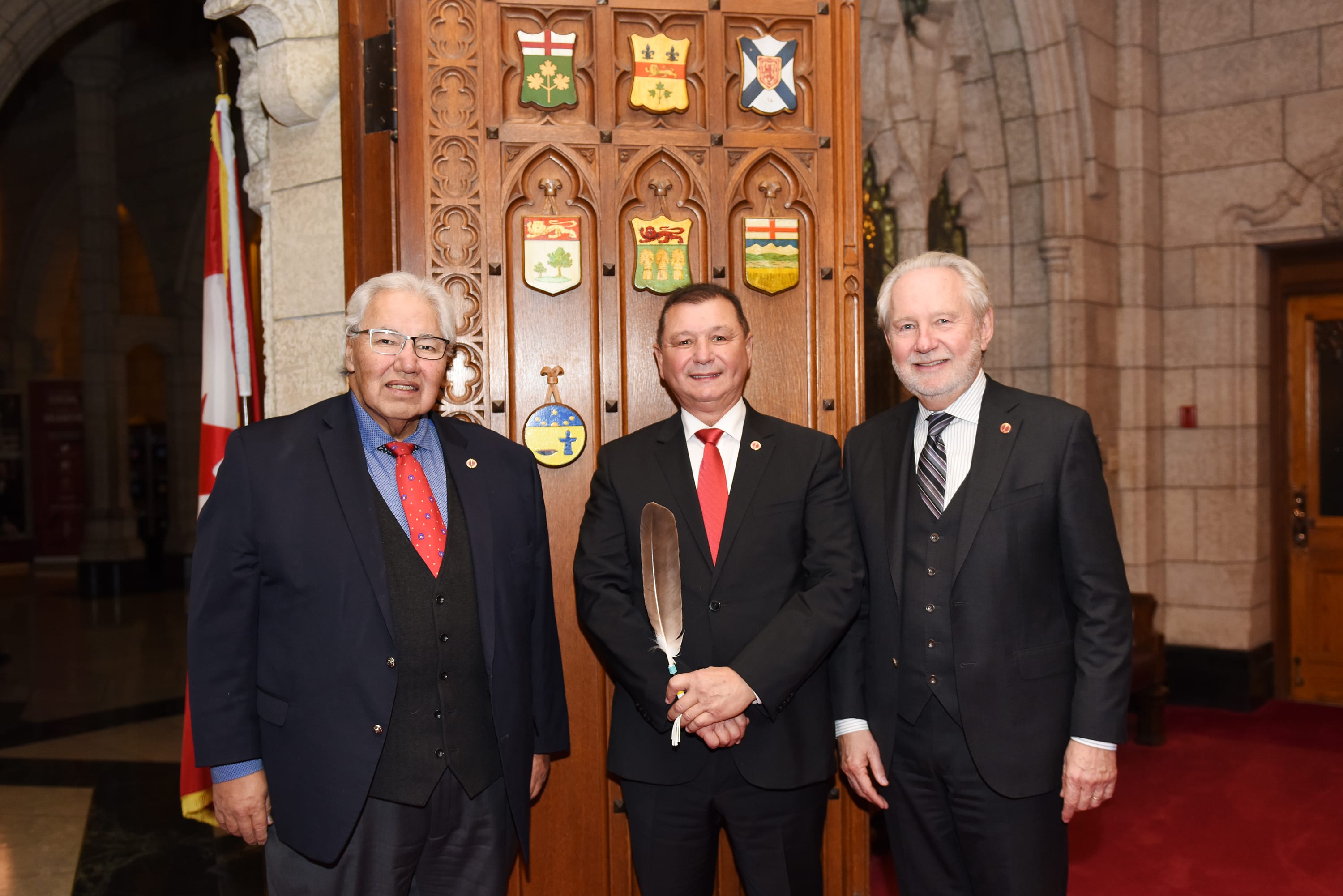 Senator Brian Francis is welcomed to the Red Chamber for the first time by Senator Murray Sinclair (left) and Senator Peter Harder (right) on October 16, 2018.

Senator Francis is a Mi’kmaq Elder and an Eagle Staff Carrier with decades of experience at all levels of government, advocating social and economic development through infrastructure investments. He has been Chief of the Abegweit Mi’kmaw Nation for the past 12 years. Under his leadership, innovative infrastructure projects have been launched from protecting biodiversity to securing safe drinking water to building housing. Coming from a fishing family, he used his knowledge to help the Prince Edward Island First Nations implement fishing agreements.