Over the past 40 years, the agreement has transformed the lives of the 327,000 privately-sponsored refugees.

Senator Peter Harder celebrated the 40th anniversary of the first private sponsorship agreement for refugees alongside former prime minister Joe Clark at a special ceremony on Thursday. The original agreement came in response to the crisis in war-torn Southeast Asia.

As the founding Executive Director of the Immigration and Refugee Board, the former Deputy Minister of Immigration and the son of refugees, Sen. Harder detailed in a speech to the Red Chamber the personal significance of the Master Agreement for the Sponsorship of Refugees with the Mennonite Central Committee.

Read his full speech below.

“As a former public servant and now as a senator, I hold a profound belief that government can be an agent of good.

There are few greater examples of this than on March 5, 1979, when the Government of Canada signed the first Master Agreement for the Sponsorship of Refugees, with the Mennonite Central Committee. This agreement provided for a unique humanitarian response to the crisis in war-torn Southeast Asia. It allowed individual Canadians to put into action the compassion they felt when faced with the horrific plight of desperate families in Vietnam, Laos and Cambodia, risking everything to flee to safety in small boats that were anything but safe.

When Canadians asked, “What can I do?” the agreement provided the answer. It allowed individuals to join with at least four others to sponsor a refugee family and bring them to Canada. Faith groups played a vital role in this arrangement by assuming the liability for the sponsoring groups and providing essential support.

It’s hard to be a tough negotiator when the people you are negotiating with are so obviously driven by the desire to do good, no matter how much or how little the government was willing to give. The result? The government changed tactics and both sides negotiated an understanding that allowed for each party to do what it can do best.

Within five months of this first agreement, 28 national church organizations and Catholic and Anglican diocese had also signed master agreements. As sponsorship groups mushroomed across Canada, public servants across Southeast Asia and here in Ottawa showed creativity and compassion to deliver on its government’s commitments. Immigration officers travelled to 70 distant camps on beaches, islands and jungle clearings across seven countries to identify newcomers.

It is telling that this agreement has withstood the test of time to serve during the more recent Syrian refugee crisis. Also telling is that this agreement stood the test of political change. The Conservative government that came into office in June of 1979, led by the Right Honourable Joe Clark, recognized that good policy and good deeds are far stronger than the pull of partisan politics.

One month after taking office, the Progressive Conservative government of the Right Honourable Joe Clark tripled Canada’s commitment to welcoming 50,000 refugees over one year. 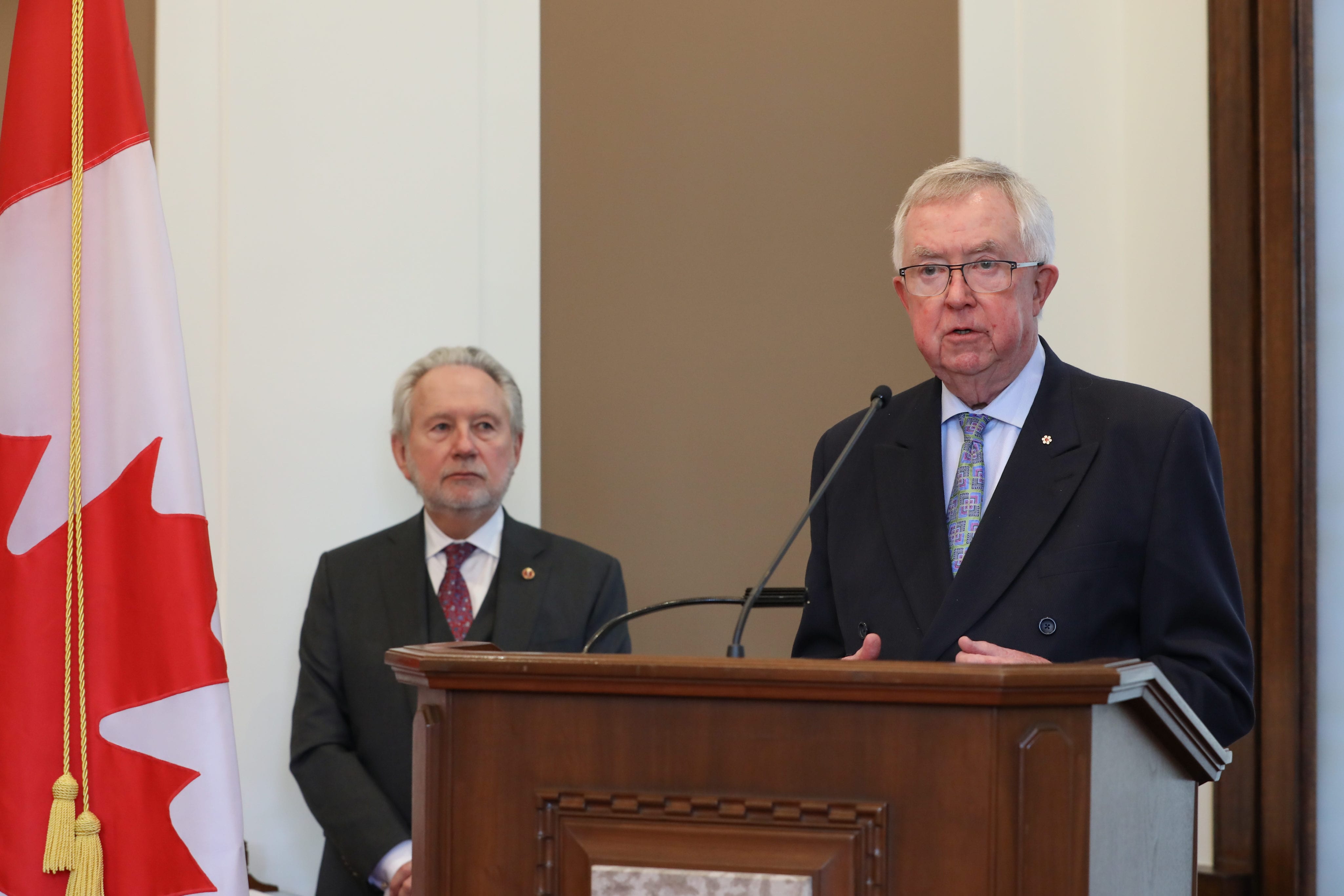 Honourable colleagues, time limits prevent me from sharing more of the pride that I feel and more of the stories that one could tell. As the former deputy Minister of Immigration and as the son of refugees who were sponsored themselves by the Mennonite Central Committee, the transformative impact the Master Agreement has had on Canada the boast beneficial result, not only in the lives of 327,000 privately-sponsored refugees who have come to Canada over the past 40 years but in allowing Canadians to express so eloquently their commitment to supporting those in need.

I came to ?? at 16 & experienced first-hand the generosity of Canadians.

Today, I joined @SenHarder, PM Clark & community leaders to celebrate the 40th anniversary of the 1st Private Sponsorship Agreement that paved the way for more than 300,000 refugees sponsored by Canadians. pic.twitter.com/ULd2PLjouN