The newest eight senators were welcomed to the Red Chamber during a swearing in ceremony on Monday, as the 44th Parliament got underway.

“This chamber, and indeed Canada, is fortunate to welcome these accomplished and committed individuals,” said Senator Marc Gold, the Government Representative in the Senate, during a speech in the Senate.

“As professionals, community leaders and volunteers, they have already made a tremendous contribution to Canada. Their experience and enthusiasm are appreciated additions to the work we do and to the modernization of this institution going forward.” 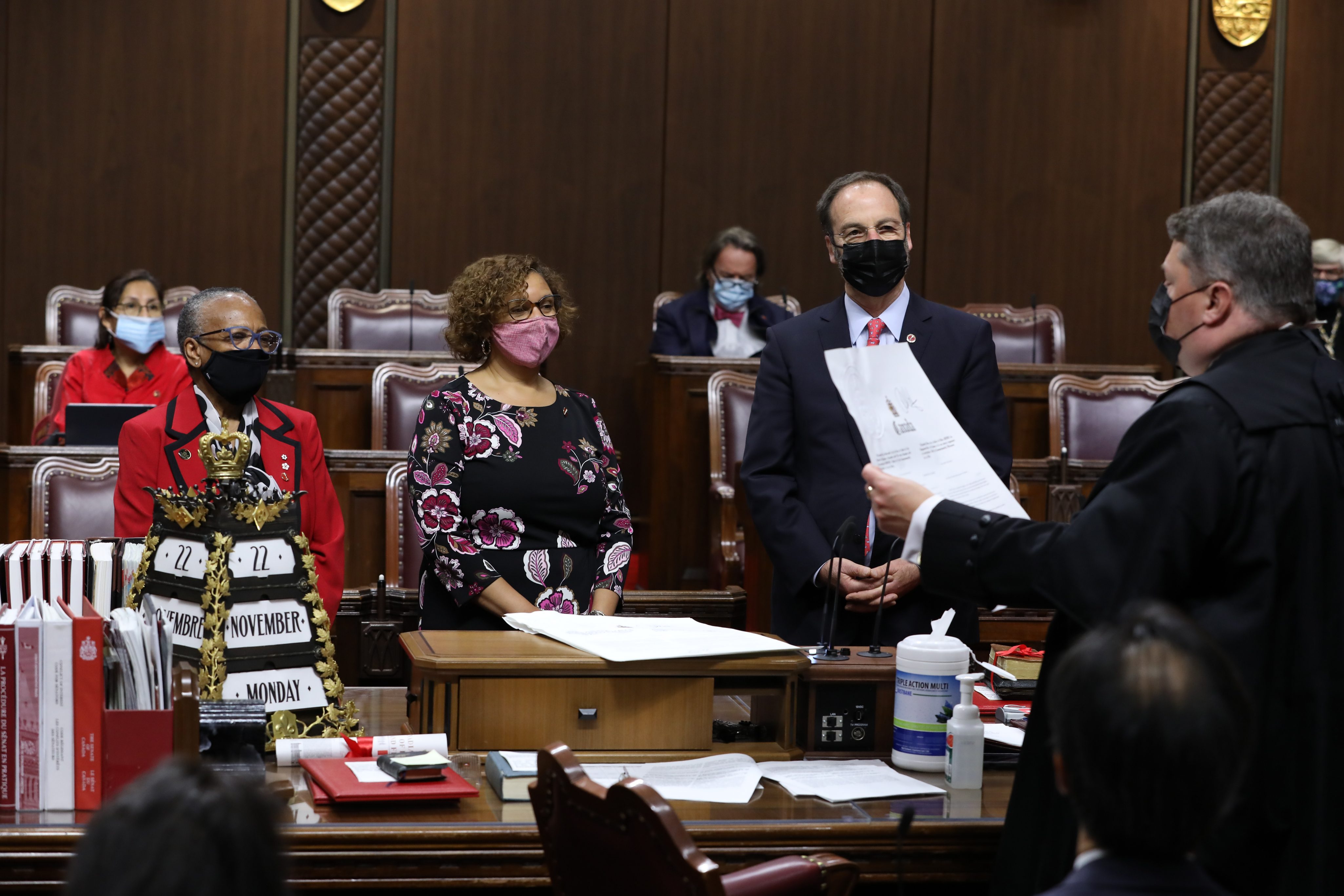 Senator Clement is a lawyer, proud Franco-Ontarian and served as mayor of Cornwall from 2018 until her appointment to the Senate. She is the first woman to be elected as mayor of Cornwall and the first Black woman to serve in that role. Senator Clement began her legal career with the non-profit corporation Roy McMurtry Legal Clinic in 1991, focusing on representing injured workers and advocating for the less privileged.  She served as its deputy director for 16 years before becoming the executive director in 2017. 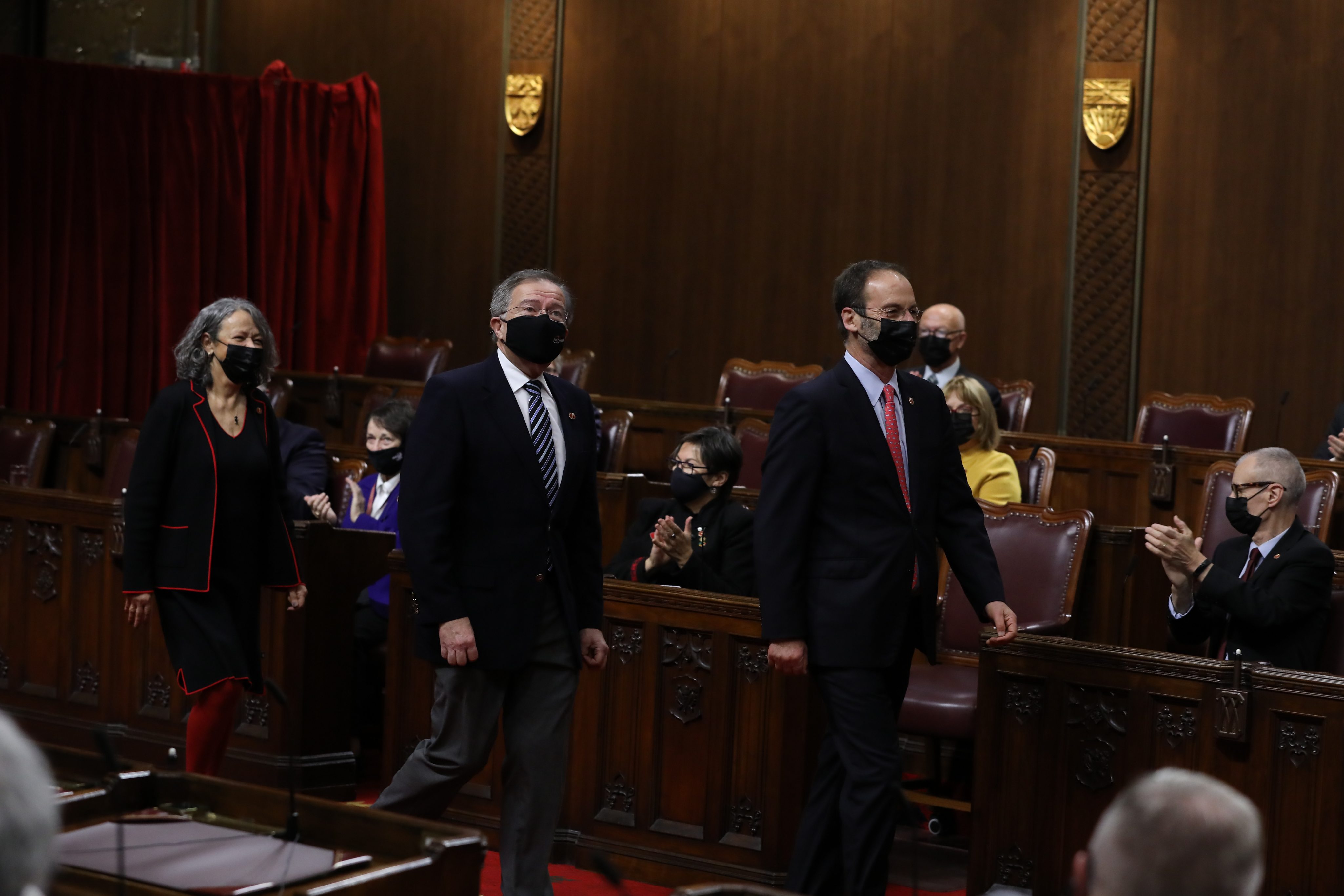 Senator Quinn has more than 40 years of experience in the marine and public sectors, including his September 2010 appointment as President and Chief Executive Officer of Saint John Port Authority. Before that position, he held progressively senior roles with the Canadian Coast Guard, both at sea and ashore. He also has a distinguished public service record, notably as Chief Financial Officer at the Canadian International Development Agency. Senator Quinn is an Honorary Lieutenant Colonel for the 3rd Field Artillery Regiment, 5th division army. 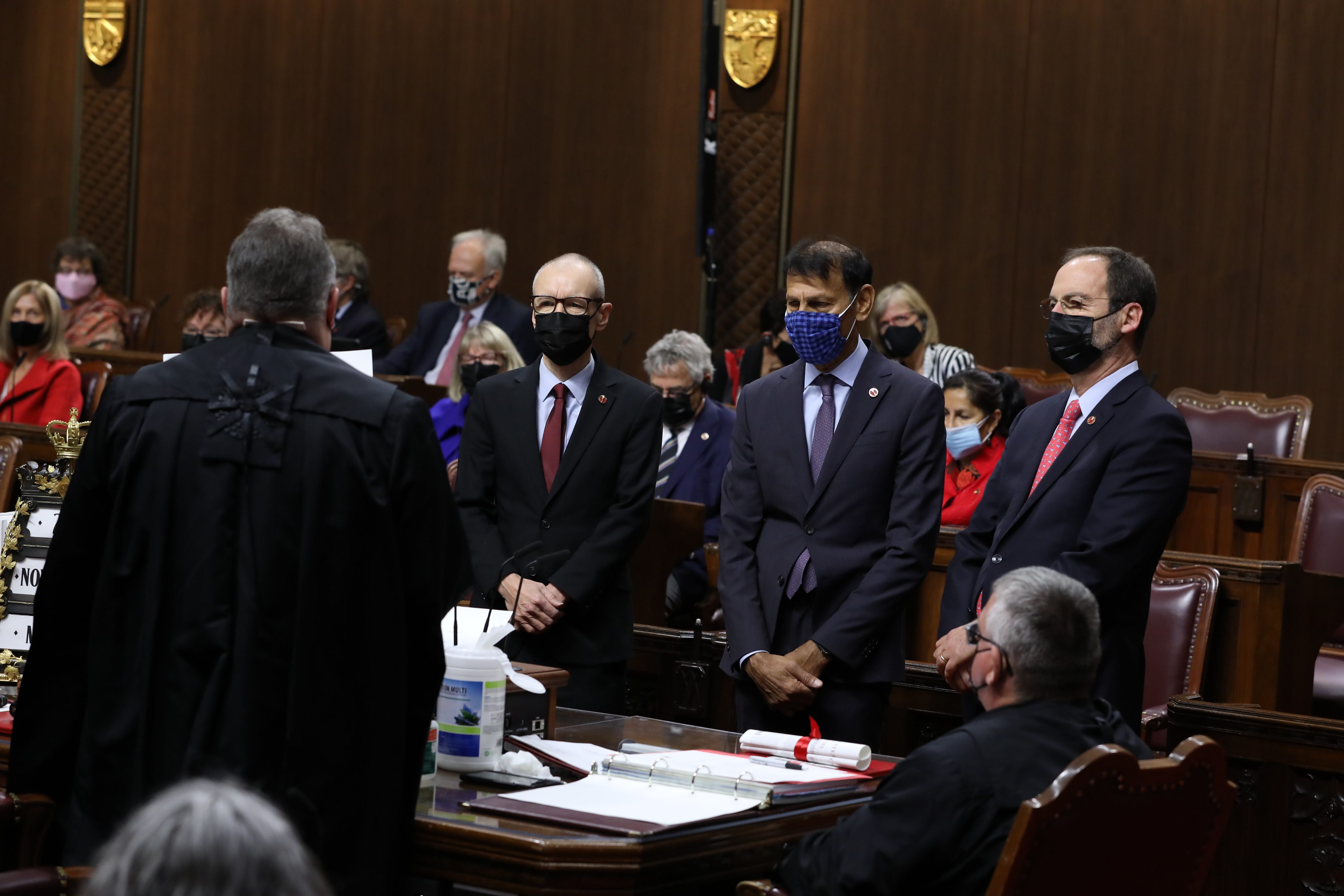 Senator Hassan Yussuff (centre) is sworn in on November 22, 2021 in the Red Chamber aside Senator Tony Dean (left) and Senator Marc Gold (right).

Senator Yussuff is one of Canada’s most experienced labour leaders. He was the first person of colour to lead the Canadian Labour Congress. Prior to getting involved in the labour movement, Senator Yussuff worked as a truck mechanic with General Motors. In 1988, he joined the Canadian Auto Workers union and became their first Director of Human Rights. In 2016, Senator Yussuf was voted in for a second term as President of the Trade Union Confederation of the Americas, an organization uniting 48 national organizations and representing more than 55 million workers in 21 countries. 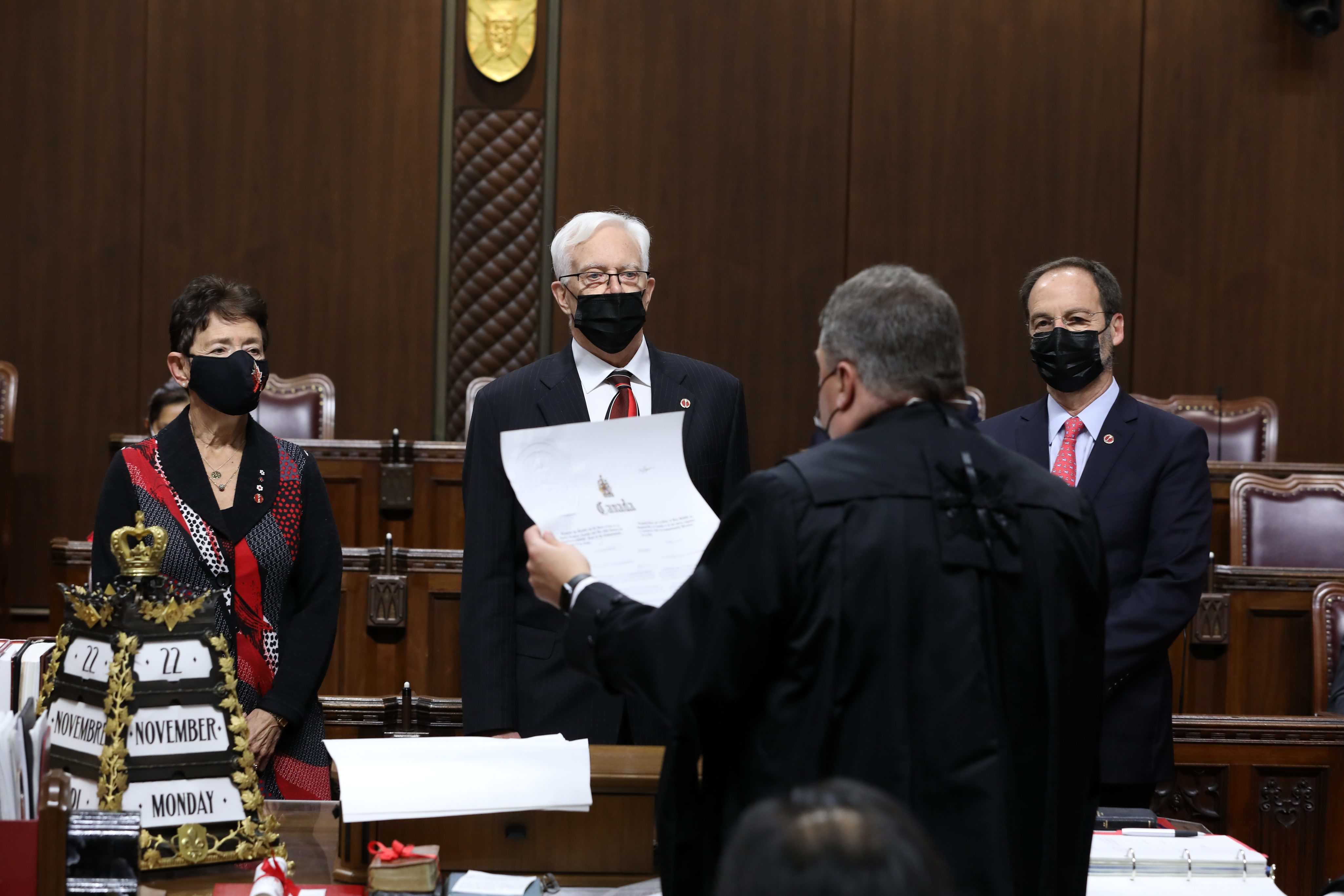 Senator David Arnot (centre) is sworn in on November 22, 2021 in the Senate chamber aside Senator Bev Busson (left) and Senator Marc Gold (right).

Senator Arnot became Chief Commissioner of the Saskatchewan Human Rights Commission in 2009. Previously, he served as a Crown prosecutor and judge in Saskatchewan, and as the federal Treaty Commissioner for Saskatchewan. He also served as the federal Director General of Aboriginal Justice. As a judge with the Provincial Court of Saskatchewan, Senator Arnot worked closely with the Poundmaker First Nation to pioneer the use of sentencing circles and restorative justice measures to promote healing in legal proceedings and give a voice to victims, community members, and families in the pursuit of constructive resolutions. His work on the “Teaching Treaties in the Classroom” project was recognized by the United Nations Special Rapporteur on Racism. 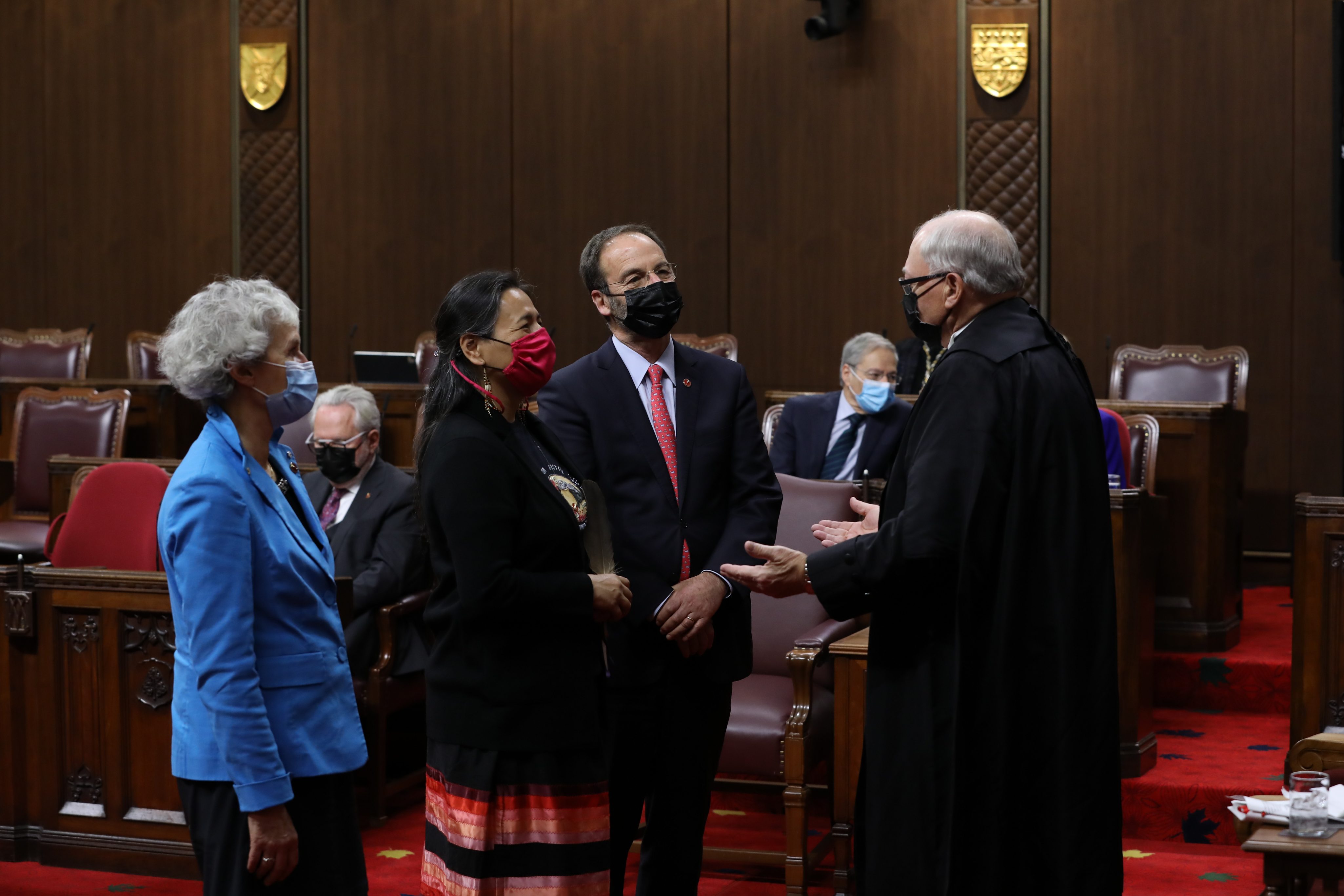 Senator Michèle Audette (centre) is is sworn in on November 22, 2021 in the Red Chamber aside Senator Renée Dupuis (left) and Senator Marc Gold (right).

Senator Audette is an Indigenous leader who was elected president of the association Quebec Native Women at only 27. In 2004, she was appointed Associate Deputy Minister to the Secrétariat à la condition féminine of Quebec and later served as President of the Native Women’s Association of Canada. She helped create an innovative graduate program in Indigenous public administration for the École nationale d’administration publique. Senator Audette was one of the five commissioners responsible for conducting the National Inquiry into Missing and Murdered Indigenous Women and Girls. 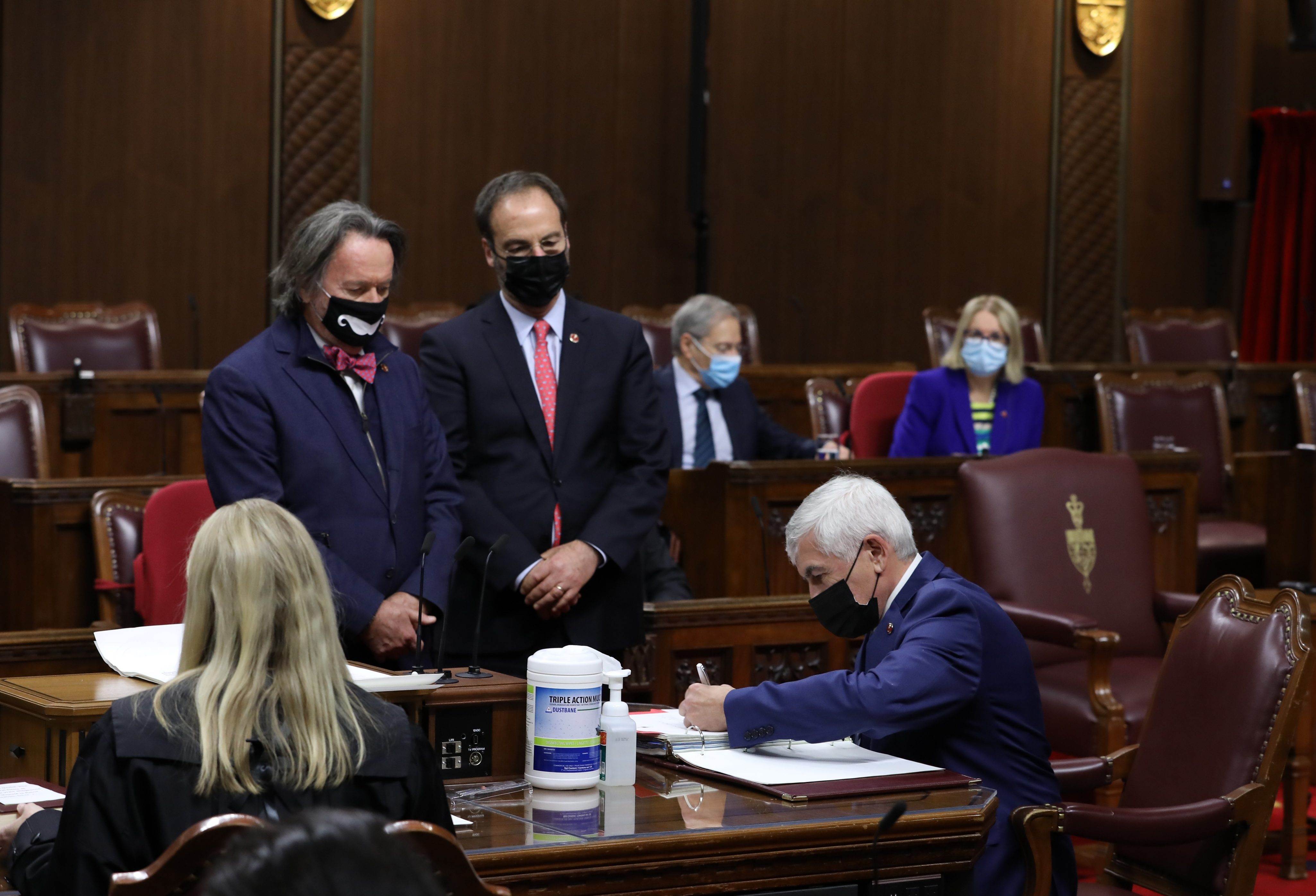 Senator Clément Gignac (right) is sworn in on November 22, 2021 in the Red Chamber aside Senator Marc Gold (centre) and Senator Dennis Dawson (left).

Senator Gignac is an economist with more than 35 years of experience in the public and private sectors. He was elected as a member of the National Assembly of Québec in 2009, and served as Minister of Economic Development, Innovation and Export Trade, and later Minister of Natural Resources and Wildlife. From 2012 until his appointment to the Red Chamber, Senator Gignac held the position of Senior Vice-President and Chief Economist at iA Financial Group 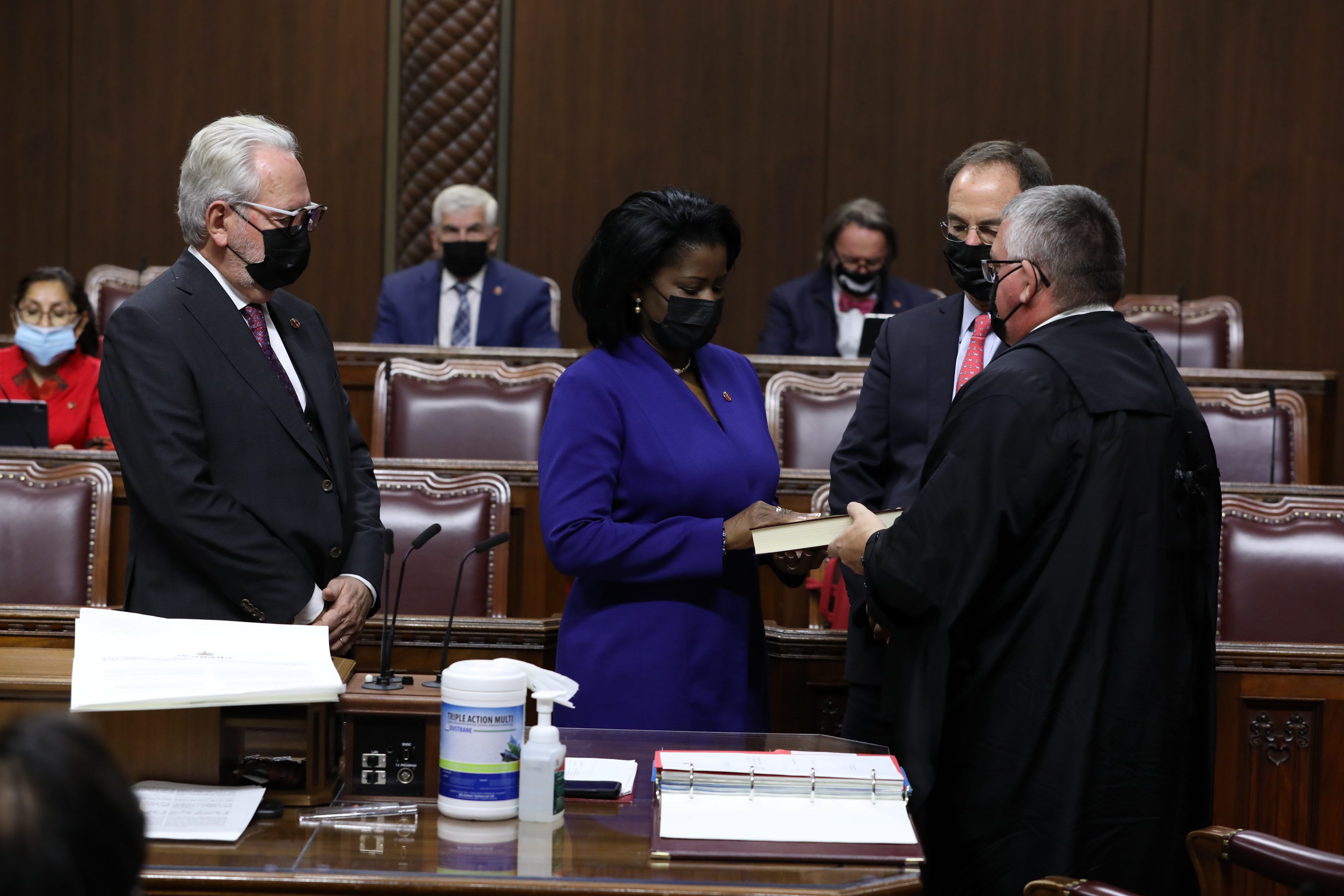 Senator Amina Gerba is sworn in on November 22, 2021 in the Red Chamber aside Senator Peter Harder (left) and Senator Marc Gold (right).

Senator Gerba is an entrepreneur who has focused on fostering an economic link between Canada and Africa. In 1995, she began her own consulting firm, Afrique Expansion Inc. in order to build bridges and encourage business opportunities. From February 2018 until her appointment, Senator Gerba was Chair of the Board of Directors of Entreprendre ici, an organization set up as part of Quebec’s 2017-2022 Plan d’action gouvernemental en entrepreneuriat to support entrepreneurs from cultural communities. Senator Gerba has served on public and private boards, including the Université du Québec à Montréal, the Canadian Council on Africa and the African Business Roundtable. 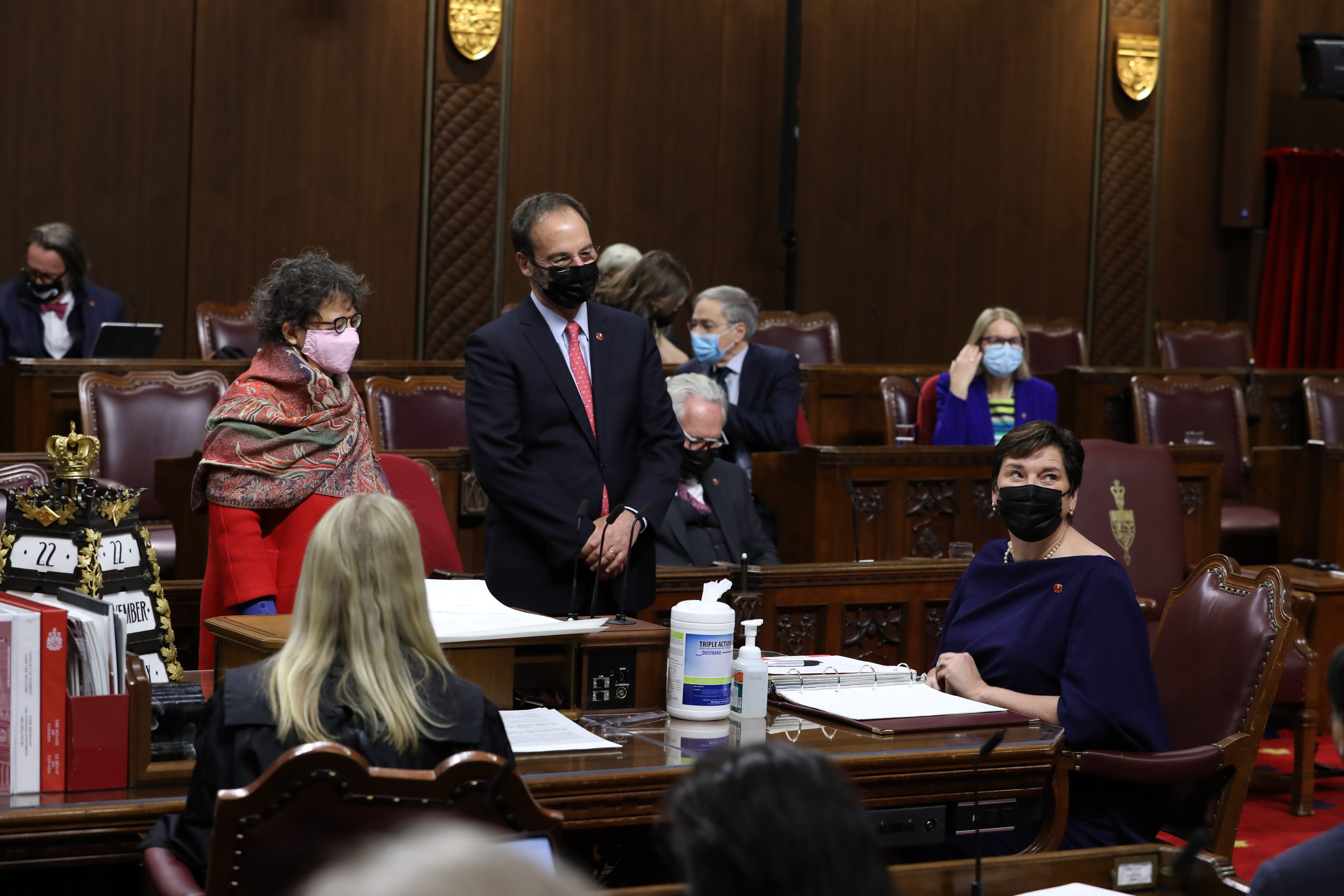 Senator Karen Sorensen (right) is sworn in on November 22, 2021 in the Red Chamber aside Senator Marc Gold (centre) and Senator Paula Simons (left).

Senator Sorensen served three terms as the Mayor of Banff. She is an accomplished community leader with experience working with all orders of government and the private sector. She previously served as a municipal councilor for six years and as a school board trustee for four. After a successful 25-year career in the hotel industry in Ontario, British Columbia, and Alberta, she founded Catalyst Enterprises Consulting in 2000, providing customer service and sales training in the hospitality industry. She supported her community through the Alberta flood of 2013, the wildfires across the province in 2017, and the global COVID-19 pandemic.

“Each and every one of us brings skills, qualities and experience to our roles and it is humbling to be surrounded by the depth and breadth of these accomplishments,” Senator Gold said. “Our new senators’ professional backgrounds and talents will help contribute to continuing this chamber’s role as a representative and thoughtful voice for all Canadians.”