Senator Harder awards Canadians for work with immigrants and refugees

As part of the Canada 150 celebrations, the Government Representative in the Senate awarded medals for work in immigration and refugee services.

The Government Representative in the Senate is recognizing seven exceptional Canadians with medals for their work in immigration and refugee services.

Senator Peter Harder awarded the Senate 150th Anniversary Medals during a ceremony in Ottawa on Wednesday. Earlier this month, he recognized five leaders in the Niagara Region with medals at the Vineland Estates Winery for making their communities a better place to live. 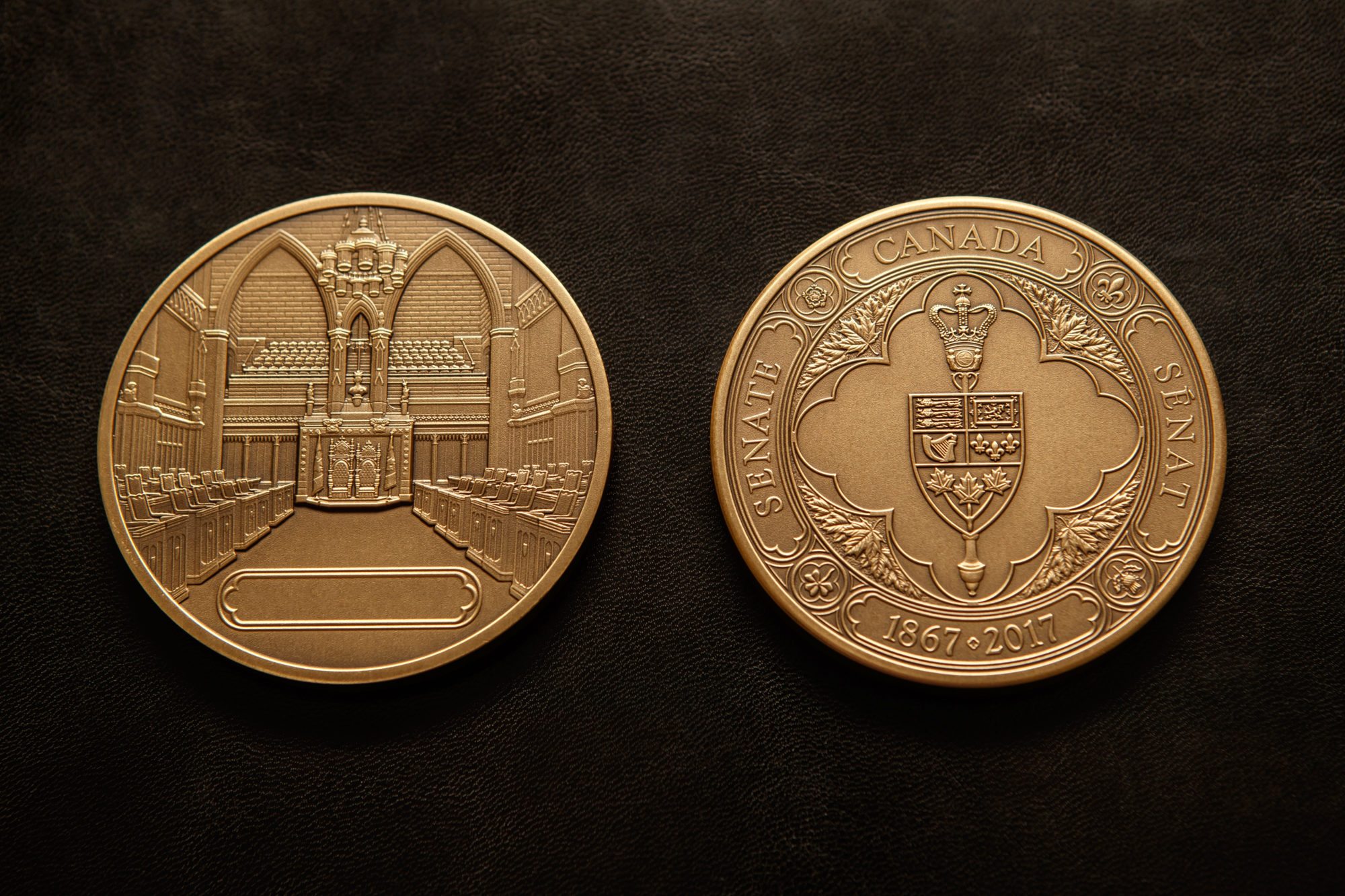 The Senate 150th Anniversary Medals feature the Senate’s badge on the front and the Senate Chamber on the reverse. (Photo Credit: Greg Kolz)

Ernest E. Allen’s steadying influence resulted in one of the largest and most ambitious resettlement efforts in Canada’s history. In 1978, he directed all immigration operations in Asia and the Pacific, including ramping up activities for Indochinese refugees. As a member of the Indochinese Refugee Task Force, he negotiated contracts for 181 charter flights to deliver more than 60,000 refugees to Canada. Allen helped Canada respond to humanitarian crises, opening doors and creating centres for people with nowhere to go.

Anne Arnott served as an foreign service officer for nearly 40 years, including 16 years abroad in New Delhi, Kingston, Hong Kong, New York and London.  Known for her leadership and mentoring of other officers, Arnott served as an inspiring role model to colleagues and those who followed in her footsteps. Her sound judgment, fortitude and tireless commitment provided a gateway for new Canadians.

Joyce Cavanagh-Wood is an inspiring leader and role model, exemplifying the highest values of the Canadian public service. Early in her career, she dealt with high profile refugee issues in Vienna. When Saigon fell, she travelled to Hong Kong, Guam and Camp Pendleton, where she selected hundreds of Vietnamese refugees for immigration to Canada. During her many years of service, Cavanagh-Wood helped brave men, women and children take their first steps in building new lives in a new country.

Raphael Girard joined the foreign service in 1963, serving in London, Beirut and Belgrade, where he where he processed Czech refugees. He also served as ambassador to Yugoslavia and Macedonia, and later to Romania, Bulgaria, Macedonia and Moldova. He designed a selection framework that led to the “self-exiled designated class,” which facilitated the admission of tens of thousands of Eastern Europeans in final years of Soviet system. Girard’s service to Canada as an enterprising immigration manager, an innovating executive, a creative policy and program designer and skilled diplomat always willing to take on the toughest assignments has had few equals.

Ian Hamilton joined the foreign service in 1966, and served in Cologne, Stockholm, Sydney and Madrid. As chief immigration officer for Thailand, Malaysia, Indonesia and Burma in the late 70s, Hamilton worked to help hundreds of desperate refugees on a derelict freighter off Malaysia find a new home in Canada. As an advocate for human rights and diversity over the course of his career, Hamilton served with compassion, creativity and steely determination to ensure that Canada’s doors were open to those in desperate circumstances.

During his lengthy career in the Department on Immigration, Mike Molloy was on the scene for several significant waves of immigration to Canada during 20th century—including Czech, Ugandan, Indochinese—and has worked on the Palestinian refugee issue since the early 1990s. He oversaw the implementation of the refugee provisions of the 1976 Immigration Act and the design of private refugee sponsorship program. He served in Japan, Lebanon, Minneapolis, Geneva, Jordan, Syria and Kenya. Molloy has shown caring and tireless efforts to ensure Canada’s doors were open to the refugees and immigrants that came to call this country home.

Don Smith, a retired public servant, heads the Refugee Working Group of the Anglican Diocese of Ottawa. He first started helping refugees in 1979 when he and his wife Thérèse welcomed a family from Laos as part of their parish. More recently, he was pivotal in welcoming Syrian refugees to Ottawa. As an inspiring role model in his parish and community, he has lead by example—opening his own door to those facing the direst of circumstances who had nowhere to go. He has contributed to Canada’s rich and rewarding history of refugee sponsorship.

Senator Harder awards Canadians for work with immigrants and refugees