The first to be stylized as Government Representative in the Senate, Peter Harder championed renewal in the changing institution during his term from April 2016 to January 2020.

In the spring of 2015, Peter Harder was called on for advice. As a former senior civil servant and one-time political staffer, Harder had more than three decades of expertise in politics and public service. Although he had left the public sector nine years earlier, he was still regularly asked for his views. In this case, the person asking for his counsel was Justin Trudeau — then the leader of the third-place Liberal party.

“We had a great conversation about foreign policy and government,” says Harder, downplaying his role. “Mr. Trudeau asked very good questions but he also listened.”

Several weeks later, Harder was tapped with another request: Could he be involved in transition planning, in the event that there was a new Government? 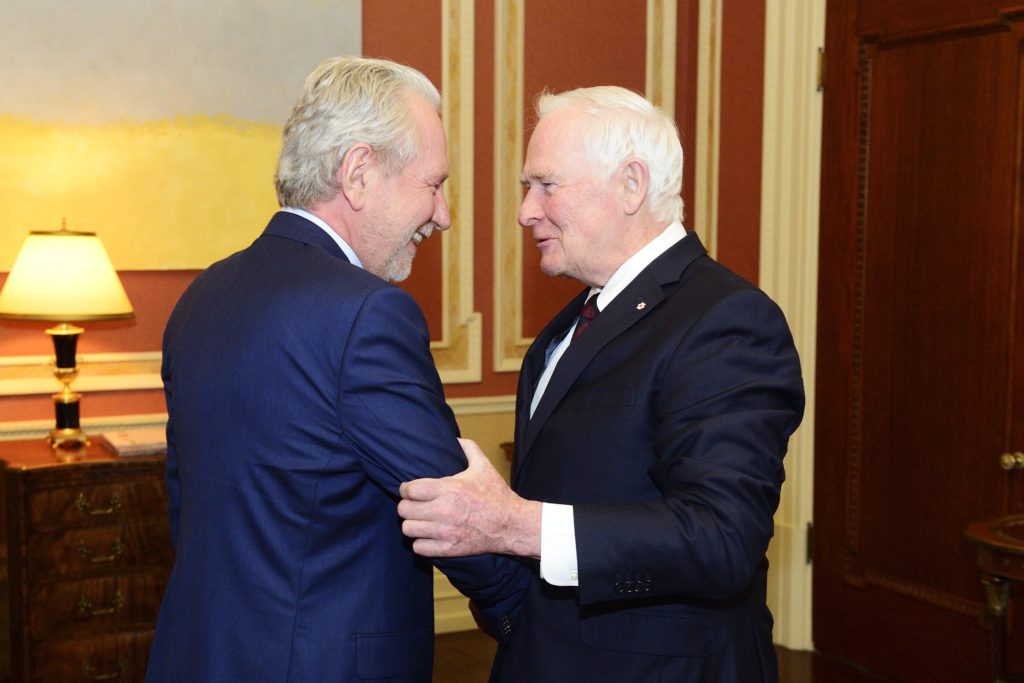 The Right Honourable David Johnston, then Governor General of Canada, congratulates Senator Peter Harder as he is sworn in as a Privy Council member in April 2016.

“I spent the summer giving it a good deal of thought,” Harder recalls. “As it became clearer that there might be a new Government, I had several conversations, gathered materials and went to Montreal for election night. I met with the Prime Minister Designate at nine o’clock the next morning for our first meeting.” The ensuing transition process was intensive but seamless.

And when it was over, as fast as it began, Harder returned to his normal life — as a husband to Molly; as a father to Andrew, his son in the foreign service; and as a policy adviser for an international law firm, a director of numerous boards and president of the Canada-China Business Council. It turned out, though, that he wouldn’t be leaving official Ottawa behind for long.

Soon after, another call came. Harder learned that he had been nominated to the Senate by the Institute for Research on Public Policy. Was he interested in taking on this new and pivotal position? The role was critical to the future of the Senate, at a time of considerable challenges to the institution — not just the expenses scandal but also a 2014 Supreme Court ruling laying out the considerable constitutional requirements for changing the Senate, including the possibility of imposing term limits or abolishment altogether. “The Prime Minister had campaigned on the notion of reforming the Senate — not abolishing the Senate and not ignoring the Senate,” Harder recalls. “Long before I entered the picture, he took the step of separating his national caucus from the Senate Liberal caucus.” He shared Trudeau’s belief in realistic reform.

In 2016, Harder joined the Upper Chamber in the new role of Government Representative in the Senate. Sitting as an independent, he acted as the first point of contact between the Government and the Senate – helping to guide discussion on Government bills among his fellow Senators, and acting as a key promoter of a suite of modernization policies to create a more independent, accountable and transparent, and less partisan chamber. Since his appointment, increased independence has been realized in several ways, chiefly in the institutional relationship between the Senate and the other branches of Government, the House of Commons and the Prime Minister’s Office.

The task is to reinvent the institution in a way that is respectful of its traditions and members, but also to introduce new procedures, rules and expectations over time,” Harder says. “This has been a respectful engagement of change.

Over the course of the 42nd Parliament, the Senate made changes to one third of Government bills, improving policy outcomes for Canadians in a diverse array of fields and fulfilling its role as a complementary review body.

Harder credits the Senate as a whole for providing crucial insights on Government legislation — scrutiny, potential amendments, critical observations — during this time of profound transformation. “At the end of the day, we have exercised our responsibility as a chamber of reflection and sober second thought,” he says. “We have done so in a fashion that has brought credit to the institution and its members. The days of the partisan echo chamber are over and we should not go back.”

Over the course of his tenure as Government Representative, Harder published several policy pieces and discussion papers, including a lengthy document on the Senate’s role, entitled, Complementarity: The Constitutional Role of the Senate of Canada. In it, he described how the renewed Senate has acted neither as a rubber stamp for the Government nor as a rival to the people’s elected representatives – complementing the House of Commons better than before.

Implementing the ambitions of Senate renewal is a natural extension of a varied civil service career. In the late 1980s, Harder advocated on behalf of newcomers to Canada as the first executive director of the Immigration and Refugee Board of Canada. He is a child of Mennonite immigrants from what is now Ukraine, whose family settled in Arnaud, Manitoba, a village near Winnipeg. “My father was a teacher who managed the local grocery store of his then-father-in-law. His wife had passed away. He had three little kids. He sent a letter to a woman who was recommended to him by his brother. They started a correspondence and he married her.” The family expanded again, welcoming two more boys, including Senator Harder, who was only eight months old when the family moved from Arnaud to Vineland, Ontario — a farming community where the family again ran a grocery store.

Young Peter worked in the store growing up, until the Harders sold the business. He attended the University of Waterloo, where he studied political science, and during school breaks worked construction in Vineland pouring concrete. He moved to Ottawa to work as a parliamentary intern and completed his graduate studies at Queen’s University in Kingston, Ontario. A German and French speaker, he joined the foreign service in 1977 and was poised for a placement in Cuba. But Havana wouldn’t happen — instead he joined the staff of the formidable Flora MacDonald, then the Foreign Minister. Harder eventually served as chief of staff for Joe Clark when he was leader of the opposition and, subsequently, was chief of staff to Erik Nielsen, then the deputy prime minister in the first Government of Brian Mulroney.

Over the course of his career, Senator Harder has been engaged in pivotal policy discussions and decisions. He was an assistant to Minister MacDonald during the arrivals of the Vietnam refugees, helping with the profound logistics of welcoming 60,000 refugees to Canada.

His personal story resonates. “Both of my parents came as refugees in the 1920s,” he says. “Their story was not dissimilar in terms of being displaced and losing everything they had. My father was 14 years old. My mother’s side came a month earlier. They arrived just in time for the Depression.”

Harder’s grandfather on his mother’s side was in his 60s when he arrived and had left behind a considerable farming operation. In southwestern Ontario, he worked as a farmer.

“My mother worked in a Heinz factory from age 16 to when she was 29,” says Harder, noting that his mother went back to Grade 9 that year and eventually became a teacher.

Decades later, Harder helped build the Immigration and Refugee Board of Canada from the ground up as the organization created a new process by which refugees could be heard and accepted as Canadians. Those were foundational times — the genesis of an important institution. It shares a spirit of future-building that is transforming the Senate today. 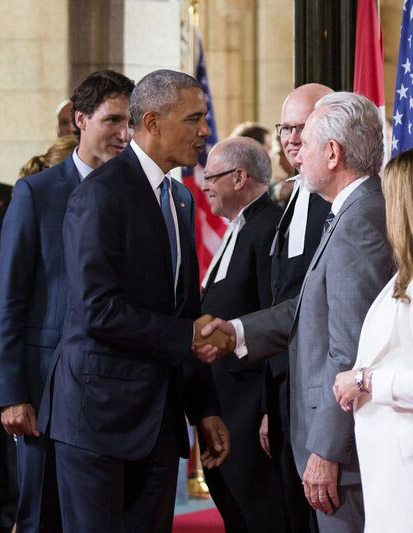 After stepping down as Government Representative in January 2020, Senator Harder continues to promote a more independent and less partisan Upper Chamber as an independent senator serving Ontario.

“The track record of the Senate four years into the new independent model provides reason for real optimism about the future of the institution. I hope the Senate can continue to build on its reforms so far in the service of Canadians.”

Senator Peter Harder served as Government Representative in the Senate from April 2016 until January 2020.