A quarter of Government bills have been successfully amended by the Senate this session.

Canada’s increasingly independent Senate has improved through amendment a quarter of Government bills this session, garnering support from the elected house on key changes to an array of legislation that includes laws on transportation, impaired driving and the legalization of cannabis.

“The Senate is returning to its roots as an institution focused on sober second thought,” said Senator Peter Harder, the Government Representative in the Senate. “Increased independence is working in the best interest of Canadians.”

Sen. Harder added that improvements were not limited to amendments. In some cases, the Government committed to studying the progress and effects of new legislation in the wake of concerns expressed by the Senate. Comprehensive studies of bills, like the Cannabis Act, also provided better opportunities for engagement by Canadians.

The current Government created an independent advisory board with a mandate to provide merit-based recommendations for Senate appointments. So far, 38 independent Senators have been appointed under the new process and many more have made the choice to leave partisan caucuses in favour of independence. The Senate is also approaching gender parity, as 45 per cent of current Senators are women. 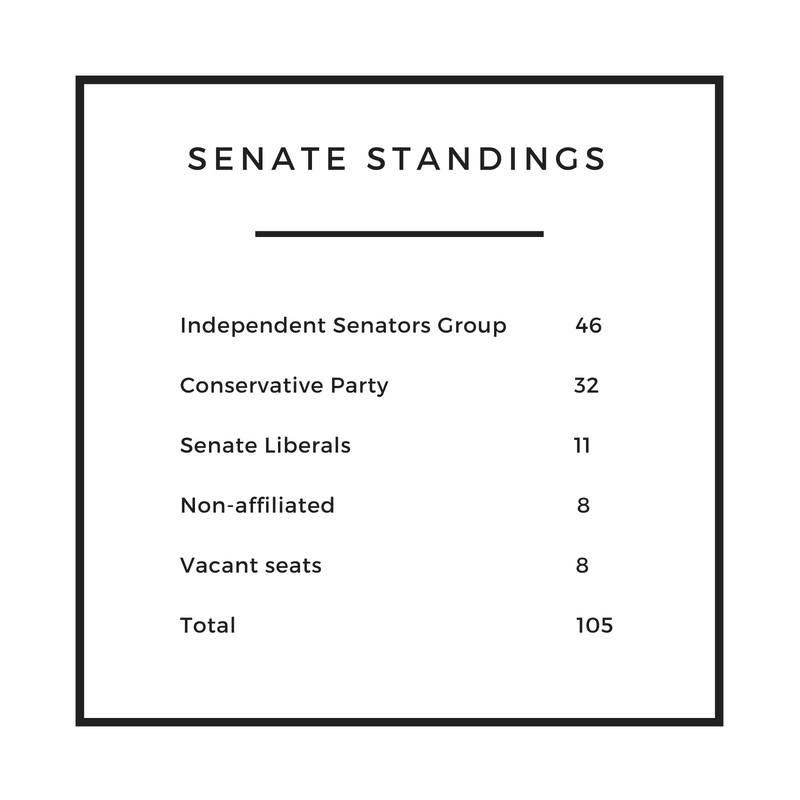 Government bills this session have all been adopted without limiting debate through closure, providing a broader  discussion that drew on perspectives from coast to coast to coast and among a wide array of stakeholders and interested Canadians. In the case of the legislation to legalize cannabis, the Senate agreed to an innovative model that created a timetable, including debate organized by theme leading up to a final vote on June 7.

“This model created more predictability, allowing Canadians to follow along as the Senate helped shape this important new law,” Sen. Harder said. “It’s a model worth repeating when the Senate returns in the fall.”

Improvements to legislation to legalize cannabis in Canada came after seven months of intensive study that leveraged the expertise of five Senate committees. Among others, the House of Commons accepted Senate amendments that: require a review of the new regime after three years; clarify that the legislation does not override the Youth Criminal Justice Act; and allow the use of cannabis pesticides and fertilizers, in addition to many technical amendments.

The Minister of Health and the Minister of Indigenous Services also thanked members of the Senate Aboriginal Peoples Committee for its work on the bill, and committed to continue to consult with Indigenous communities and organizations as the legalization of cannabis is implemented.

Sen. Harder said in a speech to the Red Chamber that the commitment “demonstrated once again that the Senate has come into its own as an effective, influential, and indeed indispensable platform in Parliament for the voices of Indigenous peoples.”

The Senate also successfully amended a bill targeting impaired driving to require a review of the new law within three years to evaluate whether the new law led to discriminatory treatment of any particular group.

The Senate also improved Bill S-5, which creates a new federal regime to regulate vaping products and delivers on a government commitment to implement plain packaging for tobacco products. One key change to discourage young Canadians from using tobacco prohibited the use of menthol and cloves as flavours. Another change required the Minister of Health to review the new law within three years.